Breaking down How Women Haze: Obedience leads to power

How is it that these caring, compassionate women can become “mean girls”?

Lorin Phillips, speaker with CAMPUSPEAK, admits she is still asking herself this question. It’s the culture where a myriad of hazing activities can be seen as acceptable, a culture where women are seeking out power through obedience. It’s this culture that Lorin is trying to address through her keynote How Women Haze.

Let’s dig a little deeper to one point within Lorin’s keynote—the idea that women have been conditioned to find power through obedience. “If they are good, they will be rewarded.”

A researched based book called, The Secret Lives of Girls says that women who are perceived as “good girls” will find secret ways to dominate others. Lorin found that domination is a way of releasing those feelings of “being bad” which have been oppressed by the simple concept of “good girls don’t do that”. Because of this, women often experience disconnect between their actions and being able to comprehend the consequences—it’s an internal struggle.

I’m a good girl, therefore my actions could not have been hazing…good girls don’t do that.

Lorin challenges you to become more aware of the differences you hear in disciplining and conditioning phrases between men and women, and start to consider possible connections to hazing, specifically women’s hazing.

Three key points that Lorin tackles within her keynote:

– Women who are being hazed listen or accept the hazing activities because they are “good girls.” They will be rewarded for being obedient with membership or respect.

– Women are hazing new members to discover if they are obedient; testing to she if the hazed will be a good member or not. There’s the sense that if she follows the hazing traditions, then she’s good. If she doesn’t, that sends a message of defiance, and the idea that she’s not there for “the good of the whole.”

– The act of hazing another person releases the oppressed feelings of being bad—they are dominating another person to gain power. That power can build with comments meant to test a new members commitment through the Girl Power bond. “You don’t have to do this BUT it is a tradition that everyone else has done.”

Lorin challenges everyone to ask themself: Am I contributing to the reinforcement of these notions? Am I allowing leniency to groups who do a lot of community service, are academically driven, build good relationships, that might have had hazing occur just because they are normally “good girls? Is this the message I really want to be sending?

Lorin’s message is simply about prevention. How can we, as a group, approach the prevention of women’s hazing from the female perspective?

Learn more about Lorin and her keynote How Women Haze at campuspeak.com/phillips. 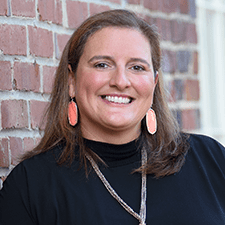