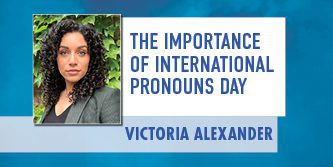 The Importance of International Pronouns Day

Referring to people by the pronouns they determine for themselves is basic to human dignity and respect. Being referred to by the wrong pronouns, or misgendering, particularly affects transgender (trans) and gender-nonconforming people. To understand pronouns and misgendering, it is crucial to understand the differences between sex, gender, and gender performance. Let’s go over that first, and then we’ll get to how to use pronouns and gender-inclusive language. I’m glad you’re here!

Sex, or assigned sex at birth, relates to the medical label assigned to our anatomy, usually assigned or labeled at birth. Assigned sex takes into account physical aspects like reproductive organs and chromosomes. People born with penises and XY chromosomes are likely assigned male at birth (AMAB) and people with vaginas and XX chromosomes are likely assigned female at birth (AFAB). Some people have sex characteristics that don’t fit neatly within male and female sex characteristics. A medical professional may label them as intersex. According to experts, around 1.7% of the population is born with intersex traits – about the same percentage as people born with red hair! Assigned sex at birth is descriptive of how medical professionals label our bodies but it does not take into consideration someone’s personal sense of self-identity or their self-expression.

Gender performance or expression is how a person expresses or presents their gender or their personal sense of masculinity, femininity, neither, or both. Someone’s personal sense of masculinity and femininity does not have to match society’s perceptions of what is perceived as masculine or feminine in order to be seen by others as valid. Means of gender performance and expression can include outward appearances such as dress, hair, make-up, voice, and body language. A person’s chosen name and pronouns are also common ways of expressing gender. It is important to note that gender performance and expression do not always signal gender identity so you should never assume someone’s gender by their name, pronouns, behavior, or appearance. Trans men are men and don’t owe you masculinity to be valid. Trans women are women and don’t owe you femininity to be valid. Nonbinary people don’t owe you androgyny to be valid.

And now, pronouns! Pronouns are already a part of our vocabulary and we use them all the time! This doesn’t mean, though, that we shouldn’t practice communicating our pronouns to people and respecting theirs. Pronouns are just words we use in place of someone’s name. Gendered pronouns may include she, her, and hers or he, him, and his. Non-gendered pronouns may include they, them, and theirs, ze, hir, and hirs, ze, zir, and zirs, and other pronouns. Keep in mind, All pronouns can be used for any gender and can be gender neutral; please don’t assume anyone’s gender based on their pronouns and please use the pronouns people ask you to use for them.

I work as a diversity, equity, and inclusion educator and often receive questions about gender identity and how to use and understand pronouns and inclusive language. I thought I would share some of my frequently asked questions here in case you have similar questions too!

How do I use they/them pronouns to refer to one person?

Think of it like someone lost their umbrella. It’s a plain black umbrella. You don’t know where this person went, you’ve never seen them before, you hope they aren’t stuck in the rain, you want to return their umbrella to them so you linger near the umbrella in hope that they return for it. I just used they, them, and their in a sentence and you probably understood me, right? If you do get tripped up using they/them pronouns, it’s okay to use a proper noun like the person’s name or a noun like “this person” or “my friend”  instead of using pronouns. For example, if I said “I like Alex. I like Alex’s glasses. They are so cool” it may be unclear whether I mean that Alex is cool or Alex’s glasses are cool. In this case, instead of “They are cool” I may choose to say “Alex is so cool.” It is okay if you accidentally mess up, apologize, correct yourself, and try again. If someone corrects you, don’t take it personally, they are just trying to help you respect someone’s identity because they care.

What do I do if I mess up by accident and I misgender someone?

It is okay if you accidentally mess up, apologize, correct yourself, and try again. Recognize that even if you didn’t mean to, you could have really hurt the person you misgendered so please commit to practicing and trying. If someone corrects you, don’t take it personally, they are just trying to help you respect someone’s identity because they care. Breaking habits and building new ones takes time. We are all learning and its okay to not be perfect as long as you are trying.

What if someone doesn’t want to share their pronouns?

That’s okay! While we should try to create an environment where people feel empowered to share their pronouns, people may choose not to. Perhaps they aren’t sure yet which pronouns they want to use, maybe they don’t want to use pronouns at all, or maybe they aren’t comfortable disclosing their pronouns in this specific space because of comfort or safety. In this case, try to refrain from using pronouns for this person and instead use proper nouns like their name or nouns like referring to them as “my friend.”

Should I call pronouns “Preferred Pronouns” or just pronouns?

There has been a shift away from using “preferred pronouns” to just calling them pronouns or even mandatory pronouns. The notion that it is a preference to use someone’s pronouns may make it seem like it is optional to respect someone’s pronouns. Respecting someone’s pronouns is not optional, it is necessary in order to have a respectful relationship or interaction with someone.

How should I let people know what my pronouns are?

There are lots of ways! You can start by saying your pronouns when you introduce yourself. For example, I say “Hello! My name is Victoria Alexander, I use she/her pronouns.” By sharing my pronouns I can help other people feel invited to share theirs and help normalize sharing pronouns and not assuming pronouns. You may also choose to include your pronouns in your email signature, on name tags, on your resume, when you enter your contact information in someone’s phone, on a button you wear on your favorite jacket or backpack, in your social media bio, and so on.

How can I refer to groups of people using gender neutral language?

This one was particularly hard for me! I would often refer to groups of people as “guys” even if they didn’t all identify as men, or “ladies” if I was making an assumption that everyone there identified as women. Both of which I should never do! We should never assume! Now, I refer to groups of people using terms like friends, humans, y’all, everyone, party people, folks, pals, friends and enemies (for added intrigue and suspense), family, siblings, fellow earthlings, gentle folk, guests, sentient beings, and people of earth. Honorable mention: Ahoy matey and good morning Krusty Krew!

What terms should I try to make gender neutral?

There are LOTS of terms that are gendered in the English language that we can swap out for more inclusive words. For example, instead of boyfriend or girlfriend try partner, switch brother or sister for sibling, mailman to mail carrier or mail person, fireman or policeman to fire fighter and police officer, Mr. or Ms. To Mx., Chairman or Chairwoman to Chairperson, and so on. If I’m speaking about things like reproductive rights I like to also use “people with uteruses” and “people with penises” to describe folks as not all women have uteruses and you don’t need one to be a woman and not all men have penises and you don’t need one to be a man.

Have trans and nonbinary people always existed or is this a new thing?

Nonbinary and trans folks have been and are members of many indigenous, Western, and Eastern cultures and societies from antiquity until the present day. The meaning of gender nonconformity may vary from culture to culture. Much of the societal expectations of binary gender identity and gender roles in American and westernized (imperialized) culture is rooted in European and Christian colonialism. The use of they/them pronouns to refer to a singular person is also not new and has been used in English since at least the 14th century.

If someone is trans or nonbinary does that also mean they are gay, lesbian, or otherwise queer?

Sexuality and gender identity are not the same. Sexuality or sexual orientation, narrowly, refers to a person’s identity in relation to the gender or genders to which they have physical, romantic, emotional, and/or sexual attraction to. Gender is an internal feeling or sense-of-self a person has pertaining to, and differentiating between femininity and masculinity, somewhere in between, some combination, or another choice entirely. Trans people may be straight, lesbian, gay, bisexual, asexual, or any other sexuality just as cisgender people can be.

A Note on Black Trans Folx

Where can I learn more?