It’s 3AM and I’m sopping wet, embarrassed, and there’s a few hundred people staring at me! I just failed at American Ninja Warrior and to my surprise…I’m so, so thankful for it.

My introduction to American Ninja Warrior was first as a Host for NBC. My job was to be a goofy athletic guy who tried the highly difficult obstacles on this elite competition series and probably failed in a funny way. And I failed! A lot! In fact, I failed at American Ninja Warrior more than anything else in my entire life. I’ve been a World Championship lacrosse player, award-winning Champion Coach, and a World Record Holder. But now, I’m failing repeatedly, over and over again, and when you fail it’s very tangible. You fall in water, it’s frustrating, embarrassing, and there’s a lot of people looking at you! I found out that between in person and on-line over a Million people have watched me fail!!

When we fail at something, it makes us want to stop. Quit. Bail on ourselves. But in continuing with American Ninja Warrior and continuing to go through Failures, I learned so many amazing lessons. Lessons of how we can progress PAST our failures and achieve our goals.

One of the most freeing lessons in life is that whatever it is you would like to do, no matter how many times you fail at it, if you keep going then Failure Ends. Failure is not this permanent and mystical force field around what we want to do. No! It is this temporary step in a journey, and if we stay true to our desire and committed to keeping at it — then Failure ends. This was one of the most freeing gifts to learn because it truly means: You Can Do Anything.

Not in some corny cliché way, but in a very real-life way. From learning something new, to moving to a new place, or even changing up how we lead our lives – Failure is simply the first step. And as long as we keep going, as long as we are stubborn with our commitment to ourselves, then failure is no match.

Now, failing will continue to pop its head up! Because we’re not robot cyborgs (yet!) who do the same job every single time. We’re human and we screw up! But as long as we remember that each failure is just a temporary setback, and we can learn from it, then we can keep going forward even stronger.

Setbacks are only setbacks if we allow them to set us back.

Leadership begins with Self-Leadership, and in playing high level sports and also being an award-winning entertainer for NBC, Discovery Channel, FX and more, I learned a few Hacks for leading ourselves past failures to success. I love sharing these Tips and Tools with audiences on how we can all progress past any failures to achieve our greatest goals! 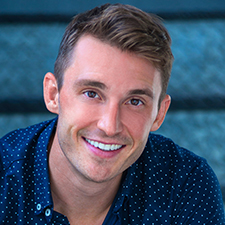 Learn more about Alex Weber and his keynotes motivational leadership keynotes at campuspeak.com/speaker/alex-weber