I am 33 years old and for the first time in my life I feel visible.

Last year I spoke publicly about growing up undocumented on a stage in the middle of Montana in front of 100 strangers. Thirteen minutes of pure adrenaline, rapid heartbeats, sweaty palms, and a whole lot of courage. I had shared my “secret” with less than a handful of close friends in the past, it was something I felt insecure, ashamed and isolated by. I felt like no one would understand or relate. I didn’t want to be judged. I wanted to fit in and be accepted. I wanted to belong.

So why did I choose to speak up and share my biggest secret in a room of 100 strangers?

I could no longer carry the weight of this secret. It was too heavy to breathe, too heavy to hold, too heavy to keep going. I had carried it for 25 years and it was no longer containable. I was ready to be visible in my most authentic and raw form. I didn’t want to hide anymore. I wanted others like myself to also be visible and heard. I had to face my fear so that I could be free.

I am one of those “DREAMers” under Deferred Action for Childhood Arrivals (DACA) that have made national headlines over the past year. Last year the Obama era program, DACA, was rescinded by the current administration. This decision sent 800,000 young people into a state of panic, confusion, grief, and uncertainty. DACA is an American immigration policy that allows some individuals who were brought to the United States illegally as children to receive a renewable two-year period of deferred action from deportation and become eligible for a work permit in the U.S.

Although I have been in America since I was 6, I never felt like I belonged here. I was born in Mexico City and my memories from there are very vague and blurry, I also have never felt like I belonged there. It often reminds me of a phrase often used by my family, “ni de aqui, ni de alla”, meaning “neither from here, nor from there”. DACA had given many people like me a small sense of belonging, we began to integrate into society after years of living in the shadows, almost invisible. I had missed the age frame to attend college so I worked hard to become an entrepreneur and launch my own business. All of a sudden it felt like it all came tumbling down.

On September 5, 2017 it was announced that DACA would be terminated. I remember that day like it was yesterday. I was at my office where I employ 4 American citizens listening to the announcement on CNN. I had to shut my door and do my best to shut my feelings off. It took every bit of me to hold back tears as a giant knot built up in my throat as I heard them say they would rescind the program because we were taking jobs, because we were illegal aliens who didn’t belong here. It was heart breaking. It filled me with a fear I dared not admit to anyone around me. I held all of the sadness, anger, and fear I felt inside myself. I’ve always been the leader of my family, I couldn’t show weakness or flinch. I have a company to run, I couldn’t let anyone see me panic. I have a child to raise, I couldn’t let him see me down. Everything felt heavy. Everything felt shaky. I was afraid but no one knew because the times required me to be brave.

Weeks went by with me walking around with the world on my shoulders, showing up, pretending to be strong while feeling weak inside. I couldn’t sleep, I found corners to cry in where no one would see me, pillows to scream in, notebooks to empty myself in. That’s when I received the invitation to attend a conference in Montana with 100 other world changers. In the beginning I felt reluctant.

A dear friend convinced me to go. I did.

Being that DACA had been making headlines after the announcement was made, I was asked to speak at the conference. I had never done public speaking and I didn’t feel qualified. It was last minute and I didn’t really have time to plan what to say or how to say it. I wanted to say, “hell no” but I didn’t. I was afraid but I said yes. I got mic’ed, I walked onto the stage, a nervous wreck disguised in confidence and pride. For 13 minutes I emptied myself, I undressed my soul, everything just poured out of me without pause, without thought, without fear, without hesitation. I let go and my heart wept in words as I shared my story, our story, of the DREAMers who were brought to America by parents who sacrificed it all for the American dream, parents who crossed oceans, deserts, seeking to give their children a better life, a chance, the story of those who learned how to grow in the darkness of the shadows hoping that one day they would see the light. It felt liberating. I remember finishing and becoming aware that there was a standing ovation.

After sharing my story, there was an article on Forbes that created awareness and presented facts about DACA through my story, people began mobilizing and asking questions. I began to have opportunities to appear in national news programs (such as the interview below on MSNBC) to debunk false information about the program, I was invited to speak with members of congress in Washington about DACA. I was in a position to change the narrative, to advocate for those who didn’t have a voice. It was something I couldn’t take for granted. Our voices were finally being heard, we were finally seen.

Over the last year, DACA has gone back and forth in the courts. As of today, most of the original program is still in place for now. It has been a rollercoaster, nothing short of draining and nerve wrecking. But it has also been liberating to live fully, boldly, in my truth, our truth is priceless. I realize that nothing is certain for DACA, but also for life in general. There will be so many fears and challenges that we will have to face as we travel through our journeys and the greatest lesson that I have learned is that in our fears we are presented with an opportunity to find freedom. May we all have the courage to find our libertad. 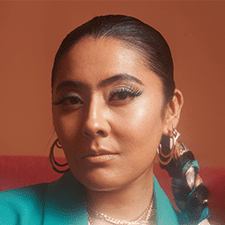